How to start with nodejs testing

With this 5 minute intro I’ll show how to test your code with yayify example, which only add 'yay' to the end of the string. If you heard about testing and tdd, but still haven’t tried then this article is definitely for you.

Why do you need tests? Tests will get rid off endless improvement headache at the start or refactoring fear after, also tests will help to verify changes in pull-requests.

To start testing your modules, you will need tools, workflow, tests itself and code to test for.

To be able to write tests, you need babel for es6, mocha as a test-runner, and assert to verify correct work of your module:

It‘s helpful to have script helpers to simplify testing workflow. Add this lines to scripts field in package.json:

test is supposed to run to verify that everything is ok. tdd is supposed to be run while development to have instant feedback. Basically this will allow mocha to watch you index.js for modification and rerun tests on every change.

You need to import yayify module to test for and which you’ll write in the future; equal is super simple function from assert module. Function it is inserted into global namespace by mocha to name your tests.

Congratulations! You just wrote your first tests. Was it hard? Don’t think so. Let’s continue. There are tests, but there is no yayify function to test for. Let’s fix this. For instant feedback while implementing yayify please run npm run tdd in terminal in a folder with your project.

Then create index.js and write there this line:

Look back to your terminal: green tests! You are awesome!

Save and commit this good enough state of things.

Have you heard about es6 template strings? Let’s use them:

Take a look at terminal again, green or red? 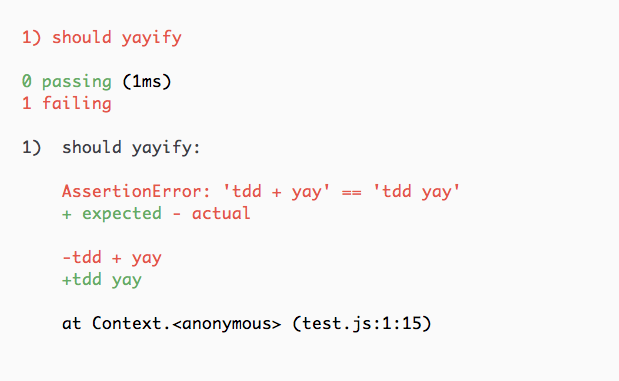 Tests should be red. It is because es6 template strings don’t need concatenation; you can write like this ${str} yay and omit plus sign. Lets fix it:

Take a look at your teminal last time:

You can find this module in yayify repo and play with it:

I hope, you learned something new today and no longer afraid of node js testing, otherwise pls tell me about your obstacles in twitter.

Keep it testable, keep is safe,
your testable Vladimir Starkov